Gorilla Mill Puts the “Edge” in Marketing Its Mills and Drills

Attend a manufacturing tradeshow, such as Eastec or IMTS, and you can’t miss Gorilla Mill’s booth. It’s the one with the big gorilla, and even trees and other items, depending on the booth size

The gorilla is a natural ice-breaker and brings people into the booth to talk – with many people taking selfies with it.
Founded in 1974 by Philipp Laubenstein in his garage, the Carbide Grinding Company, Inc. (dba Gorilla Mill) manufactures high performance drills, end mills and cutting tools.
Due to continued growth, Laubenstein moved the company to its current Waukesha, WI facility in 1980. Today the company remains a family-owned and operated business. Laubenstein’s son-in-law, Kevin Cranker is CEO; Cranker’s son Nathan is the co-Operations manager.
When asked how they came up with the idea for the Gorilla Mill brand, Cranker replied, “We were a local grind shop custom making tools and wanted to take the company and its products national. We wanted new branding that would be edgy, but not too over the top.”
Management tried out various concepts and names over a three to four-day period. At some point, Cranker said, “Gorilla Mill” and the name clicked. (While employing similar branding elements, the company is not associated with the consumer brands Gorilla Tape and Gorilla Glue.)
According to Cranker, the team isn’t afraid to make fun of themselves in order to make their marketing stand out.
The product names, for example, play up on the gorilla / primate theme, with names such as Chimps, Silverback, and Baboon. To add fun and a bit of spice, the company uses bananas as a rating scale for their tools in its catalog.

Bananas played a prominent role at the 2015 Eastec tradeshow – with the peeled fruit holding the company’s carbide end mills.
In an aisle that featured booth after booth of drills and cutting tools laid out in flat, boring arrangements on tabletops, the banana skins were eye-catching and memorable – and yes, a little cheeky, too.

Due to its branding, the company has built up a cool factor with their audience: “We can’t keep our gorilla-themed shirts and hats on the shelf,” says Cranker. “And, people do remember us from the trade shows.” When asked what advice he had for manufacturers for creating an edgy brand, Cranker offered the following:
KNOW YOUR AUDIENCE – “We market to our end users – mostly machinists ranging in age from 20 to 60 years, who like the NFL, drink beer, and ride motorcycles. They use and heavily influence the purchase of our products.”

STAY AWAY FROM “ME TOO” BRANDING – “We’re in a cut-throat market where our product is a commodity. You can buy similar products on Amazon. To stand apart, it’s important that you figure out who your audience is, and create a brand that will resonate with them versus following what other people are doing.”
HAVE FUN – Cranker advises carrying your branding elements all the way through your marketing mix, from the website and product catalog to the trade show booth and branded schwag. “Don’t be afraid to poke fun at yourself,” he says.
HAVE A BIG VISION – “We want Gorilla Mill to become a household name,” says Cranker. “People refer to tissues as Kleenex® – meaning, they use the brand name to refer to what is now a ubiquitous item. We want Gorilla Mill to be synonymous with high performance drills / end mills, so we reinforce that message throughout our branding.” 
Founded in 1974, Gorilla Mill is a family-owned company based in Waukesha, WI. All products are made in the USA. Visit www.gorillamill.com

Looking for the latest catalog? 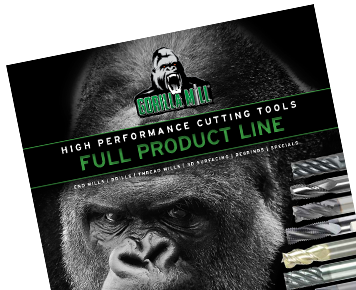